Among the many books in our temporary house I found L Cockayne’s New Zealand plants and their story. It’s the 4th edition (1967), but it still has the flavour of the 1st edition (1907). This passage, from the chapter about the vegetation of the high mountains, made me wonder: Had I really seen sheep on those mountainsides — or something else?

Perhaps the most striking denizens of rocks are the various kinds of vegetable sheep (species of Raoulia), which form hard cushions, mostly white but occasionally green — R. rubra of the Tararaus, R. goyenii of Stewart Island, R. buchananii of western Otago — and one of enormous size, R. eximia. The raoulia cushions are all constructed on the same plan. Above, the stems branch again and again, and towards their extremities are covered with small woolly leaves, packed as tightly as possible. Finally, stems, leaves, and all are pressed into a dense, hard, convex mass, making in the case of Raoulia eximinia an excellent and appropriate seat for a wearied botanist. Within the plant is a peat made of rotting leaves and branches, which holds water like a sponge, and into which the final branchlets send roots. Thus the plant lives in great measure on its own decay, and the woody main root serves chiefly as an anchor. The vegetable sheep are not inaptly named, for at a distance an inexperienced shepherd might perhaps be misled.

Bringing specimens of the vegetable sheep (Raoulia exima) for the International Exhibition held at Christchurch in 1906-7. [Picture and caption from New Zealand plants and their story]

I heard this today on Radio New Zealand — Linda Clark interviewed a guest, then announced his web address: Dub-dub-dub wildlands dot cc, instead of the usual clumsy dubya-dubya-dubya…

The Jargon Dictionary has an entry for the term, showing that this is an established usage:

dub dub dub   [common] Spoken-only shorthand for the “www” (double-u double-u double-u) in many web host names. Nothing to do with the style of reggae music called ‘dub’.

Another jargon glossary adds the term whack, as a replacement for slash. So, the spoken version of my domain goes like this:

My congratulations to Josh Larios and Cam Parish for drainspotting.com. The site lacks the polished presentation of the mirror project, but it is built on the same idea of users contributing to a shared collection of images. [Thanks to Caterina for pointing it out]. 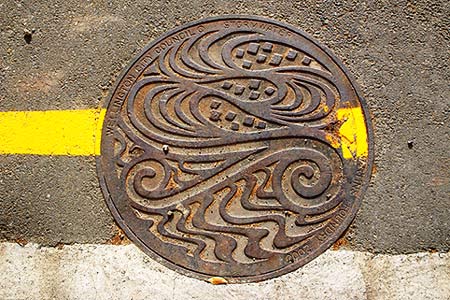 My photo of a Wellington stormwater drain manhole cover, from House swapping.

At a second-hand bookshop in Whangarei I bought a copy of E Mervyn Taylor’s Engravings on wood (Wellington: Mermaid Press, 1957). This book displays a body of work influenced by the natural environment of New Zealand, and embedded in the European tradition of printing from engraved end-grain wood blocks. The native birds, plants (like the toi toi), landscapes and people of New Zealand were his subjects, and he engraved them with freshness.

I had not heard of him before, but this says more about my poor knowledge of New Zealand’s cultural history than it does about the artist. I know now that Mervyn Taylor (1906-1964) was a well-known and well-regarded artist.

Taylor wrote a short introduction for his book, with a potted account of the history of his medium. He includes some helpful notes: For those interested in the technique of engraving, willing to investigate the subect for themselves, there are excellent reference books available. ‘Wood engraving and wood cuts’ by Claire Leighton makes a good beginning.

I know and admire the English wood engraver, illustrator and writer Clare Leighton (1899-1989) — I have a few of her prints and books — but I had not seen her how to do it book. Until now, that is.

On a shelf at the back of the same Whangarei bookshop I was delighted to find a copy of Wood engraving and woodcuts by Claire Leighton, with photographs of her at work with the graver, and reproductions of a range of artists’ work. Like Mervyn Taylor’s book, Claire Leighton’s was an ex-library copy. All those rubber stamps, card pockets and other marks of use might put off the book collectors, but I’m happy to have them. They make the book a special souvenir of my stop in Whangarei, and they don’t harm my pleasure in reading Claire Leighton’s opening words: Of all media, wood-engraving is the one in which there is the least to be taught and the most to be learnt.