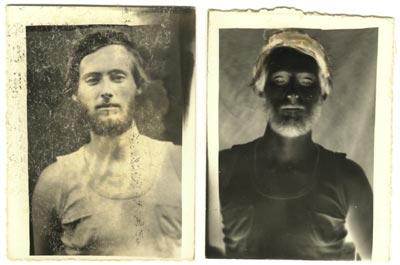 I was in Delhi in 1972, and I needed some passport photos for visa applications.

In Indian cities I saw all sorts of business going on in the street​—​you could buy food or clothes, seek advice on your health or fortune, have your shoes polished or a letter written, even have your photo taken. I found a street-photographer to do what I needed.

His equipment was like nothing I had seen in a shop or catalog. It was a painted wooden box, with the bellows and lens from an old folding camera grafted on one end. Sample portraits were displayed on the sides. The operator gestured to a stool on the pavement and a little mirror beside the lens. I sat down and composed myself, he said Stay completely still, Sir!, uncapped the lens, counted some seconds, put the cap back, and said Thank you, Sir!

Next, he slid his hands into holes in the box and fiddled inside for quite a while. He opened a door in the box and pulled out a paper negative, damp and smelling of hypo. He put the neg in a wooden holder in front of the lens, reset the focus, stuck his arms inside the box, out again, uncapped the lens, counted, recapped the lens, and reached inside again.

As I sat on the crowded footpath, I had time to admire his deftness, and wonder what was happening in the box. He must have had bromide paper and dishes of developer and fixer inside, and light-tight cuffs around his arms. One by one he made my prints, exposing a sheet of paper torn to size, then developing and fixing it. At the end he took out the prints, rinsed them in a bucket of water, wiped them with a cloth, and showed them to me. He lay them to dry on top of the box while I counted the money into his hand.

I asked him if I could have the negative too. He cheerfully gave it a splash in the bucket and handed it over with the prints.

Now, almost thirty years later, when I find these little fading pictures tucked into the pages of my diary, they carry me back to that foreign place.