The changing of the avant garde

An online catalogue of visionary architectural drawings from the Museum of Modern Art, New York. The drawings come from the Howard Gilman collection, and are shown in a slick Flash presentation. Here’s an example of one drawing, with its explanatory notes: 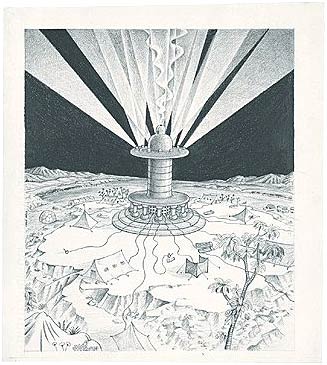 Concerned with the deterioration of urban life, in The Planet as Festival series Ettore Sottsass depicts a utopian land where all of humanity would be free from work and social conditioning. In his futuristic vision goods are free, abundantly produced, and distributed throughout the globe. Freed from banks, supermarkets, and subways, individuals can ï¿½come to know by means of their bodies, their psyche, and their sex, that they are living.ï¿½ Once consciousness has been reawakened, technology would be used to heighten self-awareness, and life would be in harmony with nature.

The Planet as Festival drawings are black-and-white studies for hand-colored lithographs. They depict such ï¿½super-instrumentsï¿½ for entertainment as a monolithic dispenser for incense, drugs, and laughing fas set in a campground, rafts for listening to chamber music on a river, and a stadium to watch the stars. An anomaly in the series is Design of a Roof to Discuss Under, which depicts Ron Herronï¿½s Walking City of the mid-1960s in ruins amid a sinking metropolis, an apocalyptic scene illustrating the destruction of the megastructure.

filed under World + Architecture
< previous  |  next >