From ‘This is what I have learned’, presented by Milton Glaser at the AIGA National Design Conference some weeks ago:

All I ever wanted to do was to make images and create form. This instinct for form-making seems to be something that is very characteristic of our entire species. It's one of the things that almost defines humankind. I like the idea of cultures that do not have an idea of art as a separate activity from their daily life, such as many African groups, where there isn't a word that approaches the idea of art. They are very interested in containing magic but that is another thing. Among the Balinese, there is no word for art. They just say ‘we do things the best that we can.’ Which is a nice way to think about what we all do. I am going to tell you everything that I know about the practice of design. It is a sort of collage of bits and pieces that I have assembled over 50 years. It includes a lot of things I've said before but I've repackaged them rather attractively. This is what I've learned.

Glaser then talks about these ten precepts:

You can read the whole of his talk, in this pdf.

Alec Campbell died on Thursday at the age of 103. He was the last surviving veteran of the First World War Gallipoli campaign.

Within a few hours an empty message with the subject: Lest we forget — a silent post in memory of Alec Campbell appeared in the newsgroup aus.photo. A string of other people posted replies, also empty. Let us join them in silent reflection…

The fine arts are five in number, namely: painting, sculpture, poetry, music, and architecture, the principal branch of the latter being pastry. [Antonin Carême (Marie-Antoine Carême) (1783-1833)].

Found among the pastry quotes on the Food Reference Website.

The Hedmarks Museum in Hamar is one of the oldest ar­chea­ol­o­gical sites in Norway yet contains many examples of extraordinarily sensitive modern architecture.

Timo Arnall has a series of panoramas made with digital camera images informally stitched together. The pictures, the buildings, and the place, are all full of interest.

Yesterday I made my first digital quad-tone prints, a milestone on my way from darkroom to desktop photographic print making. All sorts of new technologies make this possible, and the internet sews it all together: Through the net I found out about film scanners, Photoshop, monitor calibration, printer profiling and inkjet printers. I bought the printer at auction, and shopped on-line for the continuous ink system, the inks and paper. I joined in discussions, and sought information about tech­ni­cal­i­ties and aesthetics. 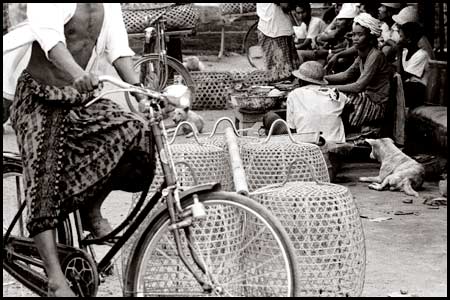 Last thing last night I emailed a couple of questions to Paul Roark in California.  His answers were waiting in my inbox this morning. Thank you Paul, I’m really enjoying this.

filed under  Me + Photography + Prints

In February I mentioned Leslie Harpold and the delights of her hoopla.com website. In early April Verisign, without Leslie's approval, transferred her domain name to someone else. While she tries to get back what is rightfully hers, Leslie has uploaded the contents of hoopla to a campsite at leslie.harpold.com.

I hope my domain is safe from hijacking — Verisign is not involved, and who else would want marquis-kyle.com.au?

Update: Leslie Harpold died unexpectedly in 2006. According to Wikipedia After her death her family chose not to maintain her websites or allow others to make her work available. This loss to the Web of her work raised the issue of digital estate plan­ning for online creators.

Haircut blogs and other inventions

Pseudodictionary.com collects new words and credits their inventors. So we know who to thank for the useful term haircut blog. That reminds me…