If you can see this message, it’s coming from a server in Atlanta, Georgia. If you can’t see it, you won’t know what you are missing.

I am prompted by today’s sad anniversary to mention two more big cameras, both even larger than the 20 x 24 inch monsters made by Polaroid and Wisner.In the late 1970s Polaroid built a one-off camera to make 40 x 80 inch images. They called it the Museum Camera, and the Boston Museum of Fine Arts photographed paintings with it. After 11 September 2001 a group of photographers led by Joe McNally used it to make studio portraits of World Trade Centre rescue workers, producing an exhibition and book entitled faces of ground zero. The project has attracted lots of attention, overshadowing an AIDS benefit exhibition of pictures taken with the big camera by Catherine Opie in 2000.

But the big Polaroid had an even bigger ancestor. George R Lawrence built a camera to make pictures of a Chicago & Alton Railroad train for display at l’Exposition Universelle in Paris in 1900. The camera was called the Mammoth, took 54 x 96 inch glass plate negatives, was transported on a special railway wagon, and was operated by a team of 15 men.

Thanks to Scott Johnson for inventing the term font bitch:

1 A person who places his or her own font preferences before those of his or her own readers.
2 An individual who honestly sees no problems with forcing everyone to read a blog or online document in 8- or 10-point fonts.

A fitting name for a disagreeable sort of person. I have sounded off about this behaviour before, and before that. And my thanks to Typographica for the pointer.

filed under  The web + Typography + Words

Steel cargo containers of solid transuranic waste are being stacked for above ground storage at the Nevada Test Site Area 5 Radioactive Waste Management Site. Each con­tainer holds up to 50 drums of transuranic waste.

This is a photograph made available by the U.S. Department of Energy, National Nuclear Security Administration Nevada Operations Office, Office of Public Affairs and Information.

The Nevada Test Site was my special place for September 1999.

My sister, blogging vicariously, has asked me to mention an anniversary that’s coming up in a few days. OK Fiona, I’ll do it by quoting from Salvador Allende’s leftist regime 1970-1973:

In August 1973, the rightist and centrist representatives in the Chamber of Deputies undermined the president’s legitimacy by accusing him of systematically violating the constitution and by urging the armed forces to intervene. In early September, Allende was preparing to call for a rare national plebiscite to resolve the impasse between Popular Unity and the opposition. The military obviated that strategy by launching its attack on civilian authority on the morning of September 11. Just prior to the assault, the commanders in chief, headed by the newly appointed army commander, General Augusto Pinochet Ugarte, had purged officers sympathetic to the president or the constitution.

<irony>That’s all right and proper, of course. As Henry Kissinger said,

I don’t see why we need to stand by and watch a country go communist due to the irresponsibility of its people.</irony>

I’m grateful to Christina for pointing out the SkyscraperPage, a site with a collection of thousands of scaled images of tall build­ings. You can select and sort them by location, height or age, and line them up for inspection. I think it’s a delightful use of small multiples, as Edward Tufte calls this form of display: 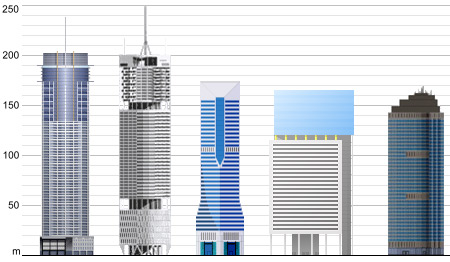 At the heart of quantitative reasoning is a single ques­tion: ‘Compared to what?’ Small multiple designs, mul­ti­vari­ate and data bountiful, answer directly by visually en­forc­ing comparisons of changes, of the differences among objects, of the scope of alternatives. For a wide range of problems in data presentation, small multiples are the best design solution.

Illustrations of postage-stamp size are indexed by category or a label, sequenced over time like the frames of a movie, or ordered by a quantitative variable not used in the single image itself. Information slices are positioned within the eyespan, so that viewers make comparisons at a glance​—​uninterrupted visual reasoning. Constancy of design puts the emphasis on changes in data, not changes in data frames. [Quoted from Envisioning information.]

filed under  Architecture + Design + The web

The computer in front of me is my ninth. Its predecessors averaged less than two years on my desk. The superseded computers have trickled down to other people, then been sold or given away. When last seen, all of them worked well but couldn’t manage the latest software — practical proof of Parkinson’s law of data. Here’s the list of PCs and where I last saw them:

Where will my old PCs end up? In landfill? Or worse? The BBC Disposable planet website has a story about illegal workshops in China:

Photo journalist Jeroen Bouman gets a rare glimpse inside the illegal Chinese workshops where young teenagers work long hours amid noxious fumes, recycling computers from the US and Europe. The industry has turned four villages in Guiyu, Guangdong province, into toxic waste tips. Drinking water is now brought by lorries from 30 kilometres away…