Among the many obits, I particularly liked William Drenttel’s In remembrance of Susan Sontag.

Whenever anyone follows a link to a page on this website, my referrer log records where they came from. Most of my visitors come from Google searches, and the log shows the terms they were searching for.

It’s fascinating to see what people are looking for (and what they find on my site). During the past week the most popular search was sam sloan, which brought five people to a page about a note­worthy ratbag. The Google search put a link to my page at number 10, right at the end of the page.

Remarkably, among the 100 most recent referrals, at least six were at the top of the page of Google results:

In this, my three-hundredth posting to Marking time, I want to record that The Illustrated Burra Charter: Good Practice for Heritage Places has been launched.

Writing this book has been a long project for Meredith Walker and me. I have already mentioned it here a few times - at first draft, final draft, proofing, and printing stages. This is a project that seemed like it would never end. But now it has.

The book open at a typical spread. It explains all the articles of the Burra Charter, and illustrates their application in a couple of hundred examples.

Australia ICOMOS, the organisation that commissioned and published the book, laid on a launch event at its conference at Port Arthur. I’ll quote from the ICOMOS newsletter:

The book’s authors Meredith Walker and Peter Marquis-Kyle spoke about their work on the book, a lengthy labour of love! It was great to have a moment to congratulate Meredith and Peter for this huge achievement. As always, they are already looking ahead to new challenges, and the next things to do in promoting good heritage practice in Australia. The rest of us truly admire their stamina!

Meredith and Peter thanked the many dozens of friends and colleagues who assisted them in tracking down good case studies from all over the country to demonstrate the application of the Burra Charter. They also especialliy acknowledged the valuable role played by Duncan Marshall, who was the skilled project manager for the Australia ICOMOS Executive Committee during the development of the publication.

We were very fortunate to have International ICOMOS Secretary-General, Dinu Bumbaru (Montreal, Canada) attend and participate in the Loving it to Death conference, and he generously agreed to launch the Illustrated Burra Charter while in Australia. In doing so, he spoke of the immense value of illustrating good practice, and of the international recognition of the Burra Charter in the ongoing development of conservation philisophy and practice withing ICOMOS/span.

The launch was held in the courtyard behind the former lunatic asylum at Port Arthur. This truck, decorated with an image of a John Glover painting, was parked nearby.

filed under  Conservation + Me + Words

I have just added websites for the months of July to December to my collection of special places. 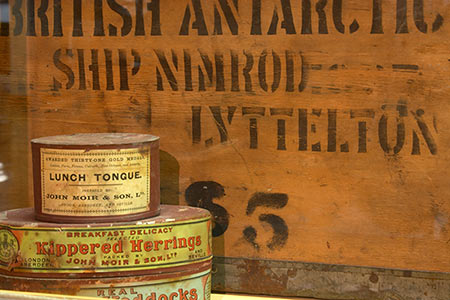 According to a mention in Garrison Keillor’s writer’s almanac, today is the birthday of Melvil Dewey.

This prompted me to look at the middens of paper around me, and think about Dewey’s invention of the vertical filing cabinet. Thinking turned into procrastination. Instead of putting those papers into those filing cabinets, I turned to Google. I found this book review: The social life of paper. Also see the short biographical entry in Wikipedia.