The walls of my office are hung with prints, mostly black and white. When I look up from my work I see woodcuts and wood engravings, lino cuts, copper and steel engravings, an etching, a lithograph, a silk screen print.

I like the way these images are shaped by the process of making them. To my right is a little wood engraving by Lionel Lindsay: a bowl of fruit, with a banana drawn with hundreds of tiny pecks and cuts of the graver. Above it is a Rex Addison lino cut: a little bunch, in which one stroke of the gouge is a whole banana. Each is just right for its medium, and every one is delicious.

But I did not know, until today, that something was missing here: Gyotaku, a Japanese method of printing directly from the bodies of fish. (Gyotaku = gyo [fish] + taku [impression]). I found this odd practice on the website of Ray Bliss Rich. Then I did a Google search for gyotaku and got more than three thousand hits.

German web designer Jens Veerbeck indulges himself with a toaster museum attached to his business site. Like the letterpress museum this is a collection that can be filtered various ways — in this case, by country of origin, by features, and by manufacturer. Our host writes:

The revelation that somebody collects toasters and other old stuff often leads to the same reaction: awkward pause, nervous laugh, then: “…Toasters?” The problem is not, to collect toasters. The problem is, to have hundreds of them. The result: They simply call you crazy. Well, and sometimes (after a look at my floor) I think they are right! 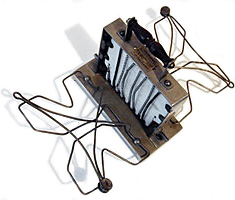 This saddening picture is from the rainforest site.

Cold war leftovers is a photographic project by Art Maples:

Started in 1998, this project is dedicated to recording the engineering and technological artifacts left behind by one of the most significant periods in American history. The global battle between democracy and communism required massive resources, and while the equipment may seem antiquated by today’s standards, it often pushed the scientific and technological limits of its time.

While popular images of backyard bombshelters or East Germans desperately crossing the Berlin Wall may remain etched in the American psyche, much of this decades-long conflict occurred out of the public view. With few attention-grabbing “battles” much of the tremendous infrastructure that helped win the Cold War was rarely seen in any detail. Combining documentary and fine art photography, the goal of this project is to capture these historic facilities and machines as they stand today, before they are retrofitted, reused or destroyed.

More online exhibitions: The Science Museum puts neat little exhiblets on its website. Like Blockmaking, eight pages about machines from the Royal Navy block factory, set up in 1805. The factory pioneered mechanised production of large numbers of identical widgets. Lots of blocks (which sailors never call pulleys) were needed on sailing ships — the exhiblet tells us that a seventy-four gun ship needs 922 of them. So the ship’s block was a good candidate for factory production.

…ten men, by the aid of this machinery, can accomplish with uniformity, celerity and ease, what formerly required the uncertain labour of one hundred and ten. — Richard Beamish, ‘Life of Sir Isambard Brunel’.

The exhiblet mentions the debates over who invented the block factory:

Tributes for this high accolade have been given to three men. Sir Samuel Bentham, by his wife, Marc Brunel through the articles in Rees’s Cyclopedia, and Henry Maudslay through his assistant James Nasmyth.

Briarpress.org has a delicious online museum. Dozens of virtual printing presses are here, richly linked and organised, displayed with other tools of the trade. And there is an illustrated glossary of letterpress terms​—​handy if you don’t know your frisket from your tympan. I admire the clarity of words, pictures and nav­i­ga­tion. My congratulations to Eric Nevin and the other authors.

Glossary illustrations for ‘bed’ and ‘platen’, from Briar Press museum

Here’s another one for the ratbag file. Someone known as Transactoid has an online collection of bread tags, with illustrated notes about tag types and terminology for collectors. Compared with this, even banana stickers or vomit bags sound engaging.

How I spend my days 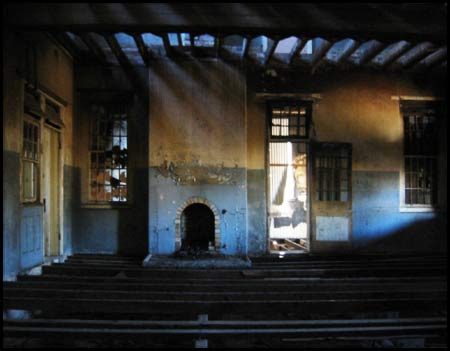 I have praised Georgia and Verdana, the very screen-legible typefaces designed by Matthew Carter for Microsoft, saying: You can download them for free. It’s one offer from Bill Gates I recommend you accept.

Now, when you go to the Microsoft Typography website you get this churlish message: Microsoft’s TrueType core fonts for the Web are no longer available for download from www.microsoft.com. What’s going on?

BlogTree.com is a site that records the pedigrees of blogs (that’s right blogs, not dogs). For example, when I started Marking time I was inspired by the blogs of Jason Kottke, Dean Allen and Andy Crewdson — look here to see who else was similarly inspired.

“A quite sophisticated text messaging network has sprung up,” an “insider” told the Scottish Daily Record. “If [Prince] William is spotted anywhere in the town then messages are sent out” on his admirers’ cell phones. “It starts off quite small. The first messages are then forwarded to more girls and so on. It just has a snowball effect. Informing 100 girls of his movements takes just seconds.” At one bar, the prince had to be moved to a safe location when more than 100 “lusty ladies,” so alerted, suddenly mobbed the place like cats responding to the sound of a can opener.