I’ve been reading Carrying off the palaces: John Ruskin’s lost Daguerreotypes, a book by Ken and Jenny Jacobson about Ruskin’s use of photo­graphy for observing and analysing the architecture of Venice.

The book reveals the deep scholarship the Jacobsons have ap­plied to a box of 188 Daguerreotypes they bought at an auction sale in 2006. This box contained a significant set of photo­graphs collected, commissioned or taken by John Ruskin in the 1840s and ’50s. I’m making slow and pleasant progress through the text, the photographs, and the copious footnotes.

On the left-hand page of this spread is Venice: The Ducal Palace, the Zecca and the Campanile with moored ships in the foreground. The Jacob­sons believe that this Daguerreotype was taken around 1851, by Le Cavalier Iller under Ruskin’s direction.

The English art critic John Ruskin (1819–1900) remains one of the more interesting Victorian writers on art, architecture, and conservation.

Among his most important works is The Stones of Venice, an account of the city’s architecture published in three volumes between 1851 and 1853, and based on years of study in Venice. At first he relied on sketching and drawing to record his ob­ser­va­tions, but then he took up the new medium of photo­graphy. He wrote to his father in October 1845:

I have been lucky enough to get from a poor Frenchm[an] here, said to be in distress, some most beautiful, though small, Daguerreotypes of the palace I have been trying to draw​—​and certainly Daguerreotypes taken by this vivid sunlight are glorious things.
… I am very much delighted with these and am going to have some more made of pet bits. It is a noble invention, say what you will of it, and any one who has worked and blundered and stammered as I have for four days, and then sees the thing he has been trying to do so long in vain, done perfectly & faultlessly in half a minute, won’t abuse it afterwards.

The Daguerreotype process, announced in 1839, was the first practical method of producing photographs. A Daguerreotype was made on a silvered-copper plate that was made sensitive to light by iodine fumes. After it was exposed in a camera the plate was developed by mercury vapour. Each was unique, with an exquisitely detailed image visible in the light reflected on its polished surface.

At first Ruskin bought Daguerreotypes from dealers, or com­mis­sioned photographers to make them under his direction. Later he bought cameras and other equipment and made his own Da­guer­reo­types, with help from his valets who became skilled pho­to­graph­ers.

Buying Daguerreotypes like these are well beyond my budget​—​Ken and Jenny Jacobson happily paid £75,000 for their box lot. Instead, I collect some of the cheaper photo­graphic images that came later: cartes-de-visite in the nineteenth century and post­cards in the twentieth. These ordinary tourist pictures remind me of places I have seen or want to see, and evoke the kind of travel-without-a-valet that is closer to my own ex­per­i­ence than Ruskin’s grand tours.

From my collection, a carte-de-visite view looking westward across the Piazza San Marco towards the domed basilica and the campanile. There is a wooden scaffold against the facade of the Procuratie Nuove on the right​—​conservation work is always going on.

The square in front of St Mark’s church​—​the Piazza San Marco​—​is the principal civic space in the city. It’s a wonderfully irregular series of spaces enclosed by an eclectic set of buildings. Ruskin studied the fabric of those buildings in great detail, both in the bricks-and-mortar and in his Daguerreotypes. On 28 May 1846, while he was in Padua, Ruskin wrote in his diary:

I think the campanile of St Mark’s is the most perfect in­stance of the power of proportion than can be given, for by this alone, and the right introduction of the little and grand ornament that it has, it entirely effaces all sense of its rude materials and ugly surface. The shell ornament at the top is perfectly right in its use, one of the few instances of its coming well; the loggia is delicious and yet all this would be quite vulgar without its great blank pyramidal top, and the whole vulgar if it were the least more slender than it is.

The campanile, built in 1514, fell down in 1902. Cracks were no­ticed in the masonry before the collapse, the square was evac­u­ated, so nobody was hurt. The tower was reconstructed in the same form, and re-dedicated in 1912.

Venice St Marks. This Raphael Tuck & Sons “Oilette” postcard (one of set no 7037 in the wide-wide-world series) shows the square without the campanile. The rubble has been removed, the site has been fenced off, and a new view of the ducal palace has been revealed.

I was sixteen years old when I first went to Venice. In the spring of 1966 my father and I left my mother and sister in England while we made a sortie to the Continent. In Venice we stayed in a hostel on the island of Giu­dec­ca. We began each day with a bowl of milk coffee and a piece of bread eaten at a re­fect­ory table with a view across the shipping channel to the domes, towers and terra­cotta roofs of the city. We took a ferry to St Mark’s Square; from there we walked and walked along the paths and across the squares, lost our way, and found it again. 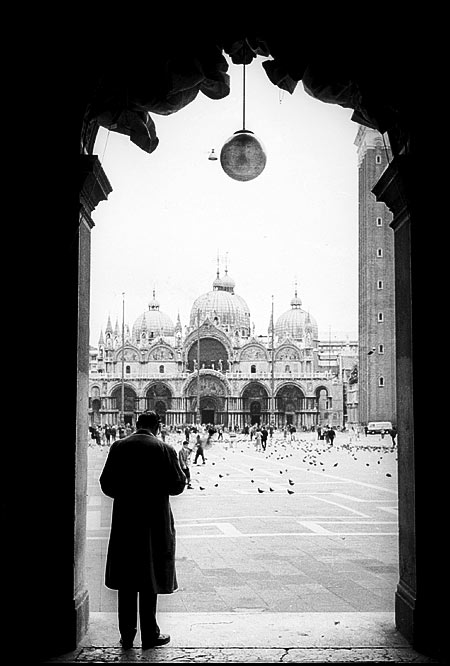 My father, Stan, photographing St Mark’s basilica from the arcade of the Museo Correr. Seeing this place was a formative experience for me, as I have mentioned before.

I did not get back to Venice until the autumn of 2010. This time I was with my partner Margie and our daughters Lucy and Sally. We stayed in an apartment in Castello and walked to the square most days. We explored the buildings that mark the edges of that remarkable civic space. One morning we ascended the campanile and looked down on the pattern of the city and, on the hour, were deafened by the bells. Then we went down into the square and found the place where I had been standing in 1966 and Lucy took a picture.

Lucy’s photograph of me re-enacting Stan’s visit in 2010. This picture, and the one above, now hang together in Stan’s nursing home room.

On this page
Recalling the view across St Mark’s Square