In March 2000, ten researchers and technical experts from Keio University in Tokyo and from NTT spent two weeks in The British Library creating digital images of the two [Gutenberg] Bibles and the other related items.

You can see these remarkable books on the library’s website. Each bible has more than 1,200 pages, and every page is beautifully reproduced. At the highest resolution (1450 x 2048 pixels) the JPEG images are sumptuous. (Hint: click the image of the bible to see inside; click small images to see large ones).

In 1929 the Ernst Leitz company of Wetzlar made a small batch of Leica Luxus cameras, gold plated and covered with lizard skin, just for the filthy-rich. The Luxus held its value​—​Christies in London sold one in 1994 for £39,600.

High prices have encouraged production of forgeries, made in Russia using parts from old Zorki cameras. You can also buy kosher replicas, with certificates of authenticity.

Meanwhile, the Leica company is still at it. Their website describes a one-off M6 camera covered with snakeskin of a protected Asian species for which a limited catch is authorised.

Thanks to the World Wide Web, low-budget camera obsessives can join in too. Cameraleather.com sells pre-cut reptile skin covers for ordinary old Konica, Minolta or Olympus cameras​—​in shades of lizard, alligator or snake skin to suit the camera’s complexion. Prices start at US $28, plus postage.

ArtandCulture.com presents an interconnected guide to all the arts, offering information about artists and movements in the Design Arts, Film, Literature, Music, Performing Arts, and Visual Arts. Learn more than about that individual artist or movement; learn about the relation to other artists and movements across the disciplines.

The content is limited to a basic selection of artists and movements (only 43 architects and 26 photographers represent their fields). The short articles are well written, with good in-site and off-site links. I hope the material will grow in the future.

The best thing is the three-way navigation scheme: you can search for keywords, browse subject lists, and (most innovative) follow a chain of conceptual associations with the Cloud. As the site explains, the Cloud allows you to experience the context of an artist or movement. Click on anything in the Cloud — an artist’s name, a movement, or a keyword — and that item moves to the centre of a new Cloud. Try it here with the Pablo Picasso Cloud.

The Cloud reminds me of the ThinkMap application used in the Smithsonian’s experimental Revealing things website.

filed under  Maps + The web

Jack of all trades and New York taxi driver Sam Sloan is opinionated and litigious. He’s obsessed with chess, he’s suing the city Taxi Commission, he doubts President Clinton’s parentage, he has a political solution for Afghanistan, and he relentlessly follows those who have done him wrong.

He wrote a book about Thomas Jefferson, available from amazon.com. I haven’t read it, so please don’t take this as a recommendation.

The Getty Museum website has a video of this picture-taking process, invented in 1851. By 1880 it was superseded by mass-produced dry plates.

I am pleased to find the the US National Parks Service website is back on the net. See US judge pulls the plug on the internet for background.

That means I can get to the Preservation briefs again. These short papers on conservation subjects are full of pithy advice. A good on-line resource.

filed under  Conservation + The web

This project was started with two participants on January 1, 2001, and lasted 100 days. It was a success. Each participant’s entries could be read straight through, Day 1 to Day 100, yielding a staccato-paced, erratic diary, or they could be read side-by-side, offering standalone entries, words and themes often intersecting by chance, circumstance or mood..

Doing it every day is too rigorous for me, but there is pleasure in polishing pieces to an exact length: Go to my story-in-eight-photos of an overland trip in 1972 and count the words in each caption.

Ftrain is listed in my bookmarks under the heading blogs. But it’s not the usual daily stream of jottings and outbound links. Paul Ford writes short pieces of fiction and non-fiction, each richly linked to other pieces on the site. You can follow con­nec­tions up and down a hierarchy of subjects, sideways to related pieces, or back and forth chronologically. Ftrain is built on a database of content, and (I guess) some nifty programming that maintains the pages.

Among its reader services Ftrain can keep a tally of the pages you have seen. I recently discovered and signed up for this service, and today it told me: Your name is Peter and you’ve visited this page 2 times. You’ve seen 28 pages on this site out of a total of 765. Then it lists my last viewed and most viewed pages.

I admire the organisation, but I enjoy the content. Paul writes well. Words are the main content, but there are images too. Small wood engravings decorate the top of each page: a face, an animal, a skep, a metronome. 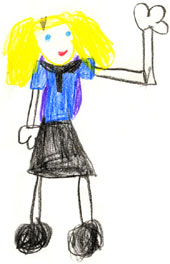 My daughter Lucy’s drawing of herself in school uniform

Testing the changeover to Blogger Pro. Yes, that worked. Thanks Ev.

I enjoy living among timber buildings, but it’s a special pleasure to visit good stone buildings — for one thing, the rustication works much better.

The Hoopla 500 is an experiment in text. Each entry is approximately 500 words in length, and topically can cover anything from absolute fiction to painfully detailed truth. It is not a diary, a weblog, an art project, a zine or a venue for storytelling. It [is] defined most precisely as itself: the Hoopla500. Sometimes it may be pretentious, others self effacing, but the goal is simply that it will be. In other words, its existence is the sole justification and explanation of its purpose.

That, and I like doing it. [Statement by the author, Leslie Harpold]

Update: 12 April 2002​—​The hoopla.com domain registration has been wrongly transferred, and Leslie Harpold’s site has disappeared. This has caused great umbrage among her fans.

Update: 3 May 2002​—​Leslie Harpold is back on line at leslie.harpold.com while she continues the campaign to recover her hoopla.com domain.

Update: 4 May 2002​—​More here about the bad behaviour of Verisign.

Final update: Leslie Harpold died unexpectedly in 2006. According to Wikipedia After her death her family chose not to maintain her websites or allow others to make her work available. This loss to the Web of her work raised the issue of digital estate plan­ning for online creators.

A quote for the day from Samuel Pepys’s diary.

A scientific study has some surprising findings.

It’s not a joke, Peter

I got an email from Russell Hall, architect of the wonderful column featured in my Ironic column logo. He objects to what I said about his work, and insists he was not being ironic.

Hugh Pearman has written a readable piece for The Sunday Times, Wobbly no more: testing Foster’s Millennium Bridge, about live testing of London’s newest pedestrian bridge after repairs. During a charity walk soon after it was opened, the bridge had a sickening sway. It was closed while the engineers sorted out the problem, at a cost of 20 months and £5 million. Pearman enjoyed taking part in the test:

We departed, happy in the knowledge that we had par­tic­i­pated in a great British tradition. That’s the tradition that dictates that you’ve got to have a good idea, get it wrong first time out, then cook up an ingenious, Heath Robinson solution. Like all those under-developed British Leyland cars of the 1970s where the customers were unknowingly carrying out much of the company’s testing for them.

An ugly quilt is a sleeping bag that’s been made from scraps, old clothes, bedspreads, and any material you can spare. It is an inexpensive way to make a difference in a homeless person’s life. [Quote from the ugly quilts website].

This is a note of appreciation for the National Quilt Register, a web-accessible database of historic quilts in Australia. Details and pictures of more than 1000 quilts from around the country are already available. Some are in museums, some privately kept but, as the blurb on the website says, the quilts stay where they are and the stories are shared.

It is a premise of the register that all quilts are equally significant, from the finely stitched decorative ones to the humble, functional ones made for warmth.