At last, a Daniel Marquis photograph

I am now the owner of an original carte-de-visite photograph by my distant relative Daniel Marquis, proprietor of a photographic studio in George Street, Brisbane. He established the studio in 1866, not long after arriving from Scotland. He died in 1879. 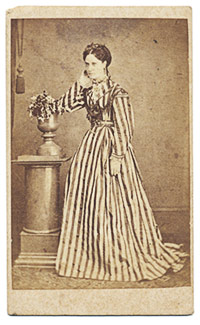 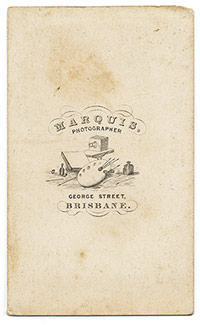 Front and back of a carte-de-visite photograph of a woman in a wonderful striped dress. See larger images.

filed under  Collecting + Me + Photography

The Stonehill Industrial Heritage Center at Stonehill College, Massachusetts, holds a vast archive of documents and objects about the shovel-making enterprises of the Ames family in the 19th and 20th centuries. The collection includes 755 shovels​—​something Eric Olthwaite could only dream of.

By the 1870s Ames was the largest shovel manufacturer in the world, making three-fifths of the world’s shovels, although even as early as the 1830s and 1840s they struggled to meet the demand for their highly prized products. Ames shovels were the tool of choice in both the California and Australian gold rushes as well as in most major American building projects including the Erie and Panama Canals and most American railroad construction. Ames shovels literally built America. [from the Heritage Center FAQ].

Engraved illustration of a coffee shovel from an 1879 Ames catalog in the Arnold B Tofias Industrial Archives.

On this page
At last, a Daniel Marquis photograph
Shovel collection