One thousand, eight hundred and six Americans of Japanese ancestry from Placer County, California were interned during the Second World War. To remember them ceramics teacher Anthony Gill laid out 1,806 hand made tea cups in an outdoor cage, about the size of an internment camp barracks. I thought we needed to find a way to visually show what the number of citizens from this tiny county looked like, Gill said.

At the end of the display period each of the cups was given away, with obligations attached. Before you take a teacup, we take away your citizenship, Gill said. You sign a card that says your status has changed from loyal citizen to enemy alien and we make you sign it as a pledge. It’s your promise to stand guard over civil rights and the teacup is a reminder of your promise. The people who participated were deeply affected​—​there is a story in a local newspaper. 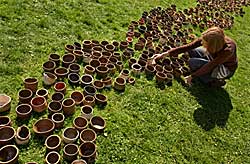 Here we see the one in the context of the many, and see the human scale of what happened. As with the 58,226 names on the US Vietnam veterans memorial, or the 120,000 named hands in the Sea of hands.